Since the power transformers are indispensable in power systems, their reliable operation are of significance. Winding deformation is one of the most common failures within transformers. At present, many methodologies have been proposed to detect these faults, and frequency response analysis (FRA) technique is most frequently used because of its low cost, convenience, simplicity and effectiveness. However, there is no standard and reliable code to interpret the mechanical deformations from FRA traces as so far. In this study, an actual transformer experimental platform was used to simulate variable winding deformation faults in order to standardize the interpretation of winding fault degree from FRA data. The measured FRA raw data are processed from the perspective of statistics, and some numerical indices are found to be more suitable for the diagnosis of transformer winding deformation degree. Introduction: The stable, reliable, safe and high quality power supply concerns the lives of hundreds of millions of people. As one of the most important pieces of equipment in power system, the stable operation of power transformer plays a critical role in the safe operation of the power system [1,2]. Statistics indicates that 25 percent of transformer faults were caused by winding mechanical deformation. Since the low voltage impulse (LVI) method was first introduced by Lech and Tyminski from Poland in 1966, many methodologies have been successively proposed to detect transformer winding deformation, for instance, the short circuit impedance (SCI) method, frequency response analysis (FRA) method and vibration method. SCI is based on the comparison and analysis of two short circuit impedance tests. In FRA, the frequency response traces are compared with its fingerprint to diagnose the occurrence of internal faults within power transformers. The vibration diagnosis method utilizes the characteristics that the transformer tank vibration will change when the winding fails [3]. Recently, some scholars present other improved techniques, namely, the sweep frequency impedance (SFI) method, which is the combination of SCI and FRA [1], the online impulse frequency response analysis (online IFRA) [4], the electromagnetic wave method [5] and the Lissajous locus method [6]. 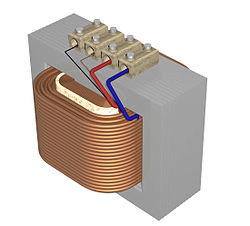