As microgrid grows and will become more interconnected, high short-circuit current level is a serious problem, which will threaten the safe and stable operation of power system. Superconducting fault current limiter (SFCL) is mainly used to solve the problem and can limit a prodigious short-circuit current to a lower level so that the protection devices can be operated safely. This paper is aimed towards the problem of utilizing SFCL with the purpose of safe operation enhancement of medium-low voltage microgrid network. The power grid model was built by using Simulink and SimPowerSystem blocks in Matlab according to the actual power system. In the case of interconnection power grid with different voltage levels, an appropriate resistance value could be obtained by analyzing the relationship between fault current reduction and the resistance value of SFCL in the same voltage level. The investigation on how to use SFCL to limit fault current level was conducted by utilizing the built model. The power grid fault occurred in middle or low voltage distribution network was simulated and the impact of SFCL on fault current reduction was evaluated. 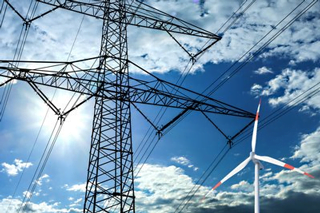