This work presents a case of integration of a transient stability simulation algorithm in an Automatic Disturbance Analysis software. The transient stability simulation algorithm is presented in a step by step solution of a chosen case, and also was made available for free download1, intending to others engineers to reproduce the results and to discuss the developed code. The algorithm was validated using a benchmark software, integrated to a multi-agent system for automatic disturbance analysis and had its performance tested using disturbance cases, presenting good results. INTRODUCTION: Power system stability may be shortly defined as the capacity a power system has to recover to an equilibrium state after being subject to a disturbance [1]. Although power system stability refers to a single topic, where the admissible operational limits are simultaneously respected for all system quantities, for all system operation horizon and after any kind of disturbance, generally the instability phenomena is majorly related to a specific set of these attributes [2]. Thus, for analysis purposes, stability is commonly classified by: the nature of predominant phenomenon as voltage, frequency or angular; the time basis in short or long terms; and the intensity in large or small [3]–[6]. It is important to highlight that specific types of stability analysis may be related to particular mathematical tools and equipment models. In this context, the transient stability term is defined as the class of stability main of angular nature, which occurs only a few cycles after power system being subjected to a large disturbance. 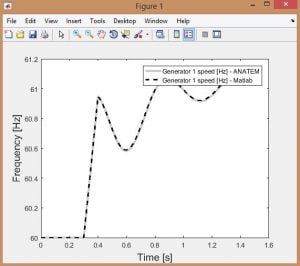