In this paper, a type-3 DFIG wind turbine is considered for a time domain dynamical study and mathematical modeling. The paper provides a full differential equations based model that is implementable by stiff solvers, such as Matlab ODE15s. The proposed model is validated vs. real measured data. The paper focuses and investigates further the so-called Q Droop function integrated with the wind turbine control system. Even with promising experimental results presented by General Electric studies, this function has rarely been studied throughout the literature. The paper emphasizes the effect of adding the Q Droop function to the reactive power control, and how this affects the whole dynamics in the system. We provide stability and control limits analysis for the system with and without the Q Droop function. Our results supported by simulations suggest the importance of the Q Droop function for stabilizing the system during sudden changes in wind speed, terminal voltage, or a severe drop in impedance. The paper also shows that the system has attraction limits that exceed the control limits suggested by General Electric and others. This can lead to either relaxing/changing the limiters or re-evaluate the state of the art modeling literature. Introduction: The generation of renewable energies is increasing rapidly when compared to fossil fuels. According to [1], wind is the fastest growing renewable energy source. In the last two decades, modeling the control components of Wind Turbine Generators (WTGs) and their dynamics has been a rapidly growing area of research. As found in [2], type-3 WTGs are more efficient in extracting power than other types. The review [3] has a detailed study of the Coefficients of Performance (Cp) for type-3 and showed that Cp can go up to a 0.4-0.5 efficiency of extraction. Most of the studies in the literature, such as, General Electric's (GE) studies [4,5] and Electric Power Institute's study [6], suggested Doubly Fed Asynchronous/Induction Generator (DFAG/DFIG) technology for WTGs. Therefore, we consider the type-3 DFAG/DFIG in our paper. 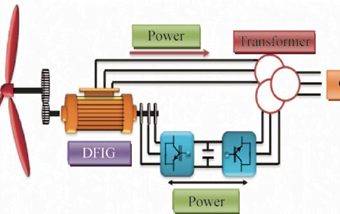